How often are we presented with an opportunity to do something different? Something that, whilst intriguing, sits outside of our normal comfort zone? 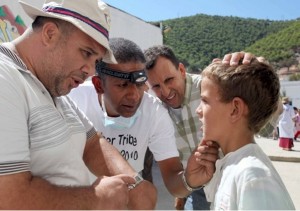 This was the situation I found myself in one morning last August upon reading an email inviting me to join a group of people to support their efforts in starting a brand new dental charity.

Their objective was to help provide dental care for the most needy around the world. I was also warned that, as a participant, I would be likely to experience some discomfort and even a little danger.

I deliberated, but his time I did take the opportunity. Perhaps I was subconsciously reminded of the title of this article.

The initial project focused on travelling to a remote fishing village called El Jebah, in the Rif mountains of Morocco to provide care for an ancient Tribe, known as the ‘Berbers’.

A member of our group had recently visited the area. While he was there, he met a Doctor who was solely responsible for the medical care of 50,000 people. However, due to the lack of funding, the Berber tribe were in desperate need of a dentist.

Our aim was to help a group of Berber school children with education, simple restorations and extractions where necessary.

There followed a frantic few weeks of scrounging for as many dental supplies to take with us as possible.

My journey began on the 24th of September travelling to Malaga, in Spain to be introduced to the rest of my party. Early the next morning we travelled by minibus from Southern Spain on the high speed ferry to Tangier, ‘The gateway to Morocco’. 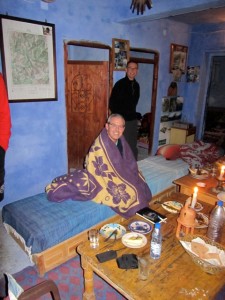 Passing through Customs in Tangier can be a long and drawn out procedure, involving ‘greasing’ several palms. It was also important that our dental supplies were not discovered as this would have created further delays and the risk of being ‘invited’ to remain in the custody of the officials! Fortunately, after an uneventful encounter we were allowed to continue on our journey.

In order not to cause offence, we were reminded about some of the customs of this deeply religious country. Firstly, the elderly do not take kindly to their photos being taken. Secondly, and much more 3 importantly, most Moroccan food is eaten by hand. Therefore, if invited to join someone for a meal, one should always eat with the right hand as the left is supposed to be used for the toilet!

Our journey continued South East by minibus for about three hours through a vast, dry, rocky landscape.

However, there could not have been any greater contrast between this and our first night’s destination, ‘Chechaouen’.

Pronounced ‘Chef Chowan’, it is nicknamed the ‘Blue City of the Rif’, and it was easy to see why. It is built directly into the hills which nestle between two mountain peaks in the Rifs such that, as we approached, we were afforded a perfect view of the whole town. A truly stunning sight!

Chechaouen is a stunningly beautiful town with its blue painted walls and its quaint narrow cobbled streets. 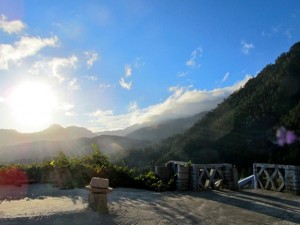 The following day started slightly earlier than expected. We hadn’t been warned about the muslim prayers which are broadcast by loudspeaker. The first one of the day starts at about 4.15am!

We set off on a six hour trek high into the Rif the following day ending with an overnight stop in the infamous trekkers stop off at the Albergue De Azaline. At 2000m above sea level, and in the heart of the illegal hash fields that form a major part of the export trade of Morocco, this ‘hotel’ offers no electricity, hole in the floor toilets, and beddings that probably carry bugs from a hundred different countries, but with a 5 star service!

It is owned by Abdul Carear. An amazingly happy and gracious man who was only too happy to provide for our every needs. Home made bread, sweet mint tea and cheese on arrival followed by a candlelit dinner, a traditional Moroccan ‘Tagine‘ consisting of gristly meat and stewed vegetables.

That evening, as some of our party felt obliged, to join Abdul in a post dinner ‘kif pipe’, we were afforded an unforgettable view of the North African sky at night. With no ground lighting to dim the view, we stared up at a starry night the likes of which none of us had ever witnessed before.

After a less than restful nights sleep, a cold shower with water fed directly from a mountain spring awoke us sharply in preparation for the next leg of our journey. With the aid of a donkey to carry our luggage that we affectionately nicknamed ‘Geraldine’, we trekked downhill for 7 hours through various Berber settlements.

Onwards through Rif Mountains we glimpsed monkeys and continued along a one foot wide mountain path sometimes narrowing to only a few centimetres where it cascaded vertically hundreds of feet down to the village of Akchour.

The following day, another minibus journey led us higher up into the mountains passing through towns thriving on the hash trade, particularly Bab Beret, the ‘Dodge City’ of Morocco! Once we had crossed over the mountain peaks, we began descending along a narrow, winding mountain-side road towards our final destination, El Jebah.

Such was the sheer beauty of the unspoilt landscape that some of us cycled the last 35km.

With its steep slopes, potholes, sharp turns and constant traffic, this was an exhausting, frightening but exhilarating finale to our expedition.

Such was the warmth and gratitude of the locals to our arrival that we were afforded accommodation in a hotel that had been newly refurbished in our honour. Redwan, the ex Mayor of El Jebah, personally escorted us around the premises and proudly displayed its many facilities, including a newly built communal shower, running water that was almost warm, and toilets that you could sit on! Although, the hole in the floor option did remain for those of us who wished to remain ‘native’. We gracefully declined.

The sense of pride, gratitude and sincerity in this man for our visit was truly overwhelming for us all.

The following morning, we were taken to a local primary school courtesy of the headmaster and met with a team of doctors, dentists and ambassadors from Morocco, Belgium and France.

Our treatment room, if you could call it that, was a small classroom with rows of chairs and desks upon which we laid out our supplies of instruments: mirrors, probes, needles, and forceps. No dental chairs, or overhead lights and no opportunity to hide these from full view of the children.

In an adjacent classroom, small groups of children were assembled and given basic education on caring for their teeth and gums. 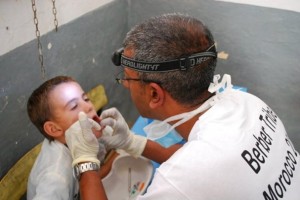 A quick show of hands revealed that less than a quarter of the children actually possessed their own toothbrush and, of these, very few actually used them. Not surprising then, that, together with their very sugary diet, they suffered from severe dental neglect.

Due to a limit of supplies and facilities, it was agreed that we would treat the most urgent cases. Our intention was to restore teeth wherever possible, but such was the degree of decay that almost all the children that we saw needed extractions.

We continued working for the rest of the day treating as many children as we possibly could. The vast majority of these had never seen a dentist before, and it was obvious that some of them would have been suffering from extreme toothache for months!

Imagine then, if you can, sitting in a classroom, watching as your friends are led, one by one, by strangers into another room. The initial excitement rapidly waning as you begin to realise that this is no ordinary day at school. And all the while, quietly waiting for your own turn.

I would like to emphasise that we exercised all possible avenues of minimising pain for these children, in exactly the same way that your 8 own dentist does back here. However, having teeth out is a traumatic experience at the best of times. Additionally, these children did not have the luxury of a common language, a positive previous dental experience to draw comfort from, or a reassuring parent to hold their hands.

Nevertheless, they exhibited a sense of calmness beyond their years and allowed us to treat them with such bravery and stoicism as I have never witnessed before, and still find difficult to comprehend.

Perhaps it is the amount of poverty and suffering that most of them have to endure which has hardened them, or maybe it is due to thestrictness of their upbringing. These children have next to nothing, but they are as warm and happy as any you would ever wish to meet and it was a great honour to be in their company.

By the day’s end, we had treated only about 50 children. Not many, considering the school numbers around 600 in total. However, as one of our party reminded us, for those 50 children, we did make a difference. 9 Particular recognition for the success of this trip must be made to a great many people: 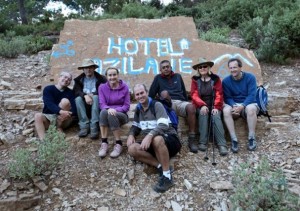 The Moroccan Team – an international group of ambassadors, doctors, dentists, pharmacists and students whose assistance and guidance was invaluable

Tony Gedge – an infectiously funny man, and a visionary without whom this trip would never have been conceived.

Domien Dom – our tour guide, interpreter, and ‘go-to man’. His industry, calmness and complete lack of fear made this trip so memorable. A man to raise your spirits!

Michael Oliver – a giant gentle Geordie who selflessly took the worst that Moroccan food poisoning could offer on our behalf, but still came out smiling. And a bloody good photographer whose photos I have borrowed for this article!

Chris Branfield – my room buddy to whom I owe a great debt of gratitude for his great company, his tolerance to snoring and other loud noises in the night!

Teresa Day – you saw the mountain and you conquered it. Living proof that we can all leap out of our comfort zones and still overcome.

To my new friends, I owe my heartfelt thanks for allowing me to join them and welcoming me so warmly.