“Up in this air you breathed easily, drawing in a vital assurance and lightness of heart. In the highlands you woke up in the morning and thought: Here I am, where I ought to be.”
Karen Blixen, Out of Africa

‘Ouda’ was crying. He and his mother had travelled a fair distance from the Rif mountains to see us. His face was swollen on one side, he was scared, and he was in pain. When he eventually allowed me to look into his mouth, all I could see were rotten teeth and an abscess.

He was only 4 years old.

I had to do something, and that something meant take out some of his teeth. But, he was so nervous and it was very likely that this was going to hurt him. But what choice did I have? There are no dentists here. Antibiotics and or painkillers may have helped but we tend not to administer them because of a risk of allergy.

I knew I’d only have one chance so I had to guess which tooth was the most likely cause of his pain. And, with the help of his mother, I eventually managed to take it out. Despite making him numb, it did hurt. And I don’t think I’ll ever be able to forget his screams of pain.

Add to that my doubts as to whether I had taken the correct tooth out, and, not for the first time during my travels to Morocco, I wondered why I do this.

I didn’t think I would ever see him or his mother again. But, early the next morning, there they were. Ouda was smiling. At me! And his abscess had gone. The rest of his family were there too. To thank us. And they handed me some family photos as a gift. In a land where terms such as ‘digital’, ‘wi-fi’, and ‘social media’ are alien, photos are considered to be precious heirlooms, this was an incredible act of generosity.

“You know you are truly alive when you’re living among lions.”
― Karen Blixen, Out of Africa

Despite always trying to treat the children painlessly, what we do can sometimes be unpleasant. And stressful. And each time I return to Morocco, I’m reminded of Ouda. Sometimes I doubt whether I could return, but I know that I will. Not just for the children because i know that there are plenty of other dentists that could easily replace me.

And, in early May this year, so I did.

2015 marks the 5th anniversary of ‘The Dental Mavericks’. Ever since our humble beginnings in 2010, our efforts have begun to be noticed. We have now partnered with another charity, RifCom. And, most recently, we were invited to work with The Eve Branson Foundation located in a village called Asni, in the Atlas mountains.

So there we headed. Our goal, as usual, was to help rid the local children of dental pain. Each year, we have a self-imposed rule: treat only those below the age of sixteen. The reason being that, without the benefit of radiographs, it’s difficult to know exactly what sort of treatment we’re committing to. But, each year, we break that rule. It’s difficult to turn people away. Especially when they’re in pain.

An equally important part of our work is to deliver a strong dental health message. One based on emphasising the importance of diet and oral hygiene and its effects on the likelihood of developing tooth decay. But these are an impoverished people. They don’t have the luxury of choice when it comes to their diet. And it’s important that we recognise and respect this. Our efforts, therefore, tend to lean towards improving their oral hygiene.

So, each year, we donate hundreds of toothbrushes and toothpastes. As well as providing fluoride treatment for all of the children.

Our group this time numbered seventeen in total, of which five were dentists. For some, this was their first visit. And, despite being forewarned about the high levels of decay and pain that they would likely experience, they were clearly overcome with emotion. Just like the rest of us had, and continue to be.

Over the course of the week, we set up our mobile clinics in two locations. Firstly in a local primary school and thereafter in the Eve Branson Foundation itself.

And, by the end of our stay, we had treated 350 children.

Since 2010, the total number of children that we have cared for now stands at 3043. But it’s not enough. We realise that we should be looking at a more grass roots level. Our aim:

Prevention is better than Cure.

So our plan is to set up a permanent ‘teeth for life’ programme in the area.

So far, we have two new dental units and a trailer for our growing pop-up surgeries which will make a difference in the delivery of pain free dentistry to the children of the Rif and Atlas mountains.

Our next venture is to raise £10,000 to fund a purpose-built dental room. With that in mind, we decided to take on a special charity challenge. A fundraiser but without the ‘fun’.

At a height of 4167 metres, Mount Toubkal is the highest peak in the Atlas mountains. And one of our team had the bright idea of climbing it. when asked if I would like to participate, I agreed. without really knowing exactly what I had committed to.

Starting at the busy village of Imlil, at the foothills of the Atlas mountains, our team of 9 set off with our watchful guide, Khalid.

Moments after we had set off, we were told that we would need crampons to complete our ascent.

We’d only walked a few hundred metres. And I was already sweating, and tired.

“Khalid, it’s 38 degrees here. Are you sure?” I remember asking. In my defence, we couldn’t yet see the peak of Toubkal.

He slowly turned to me. And Paused before pointing upwards.
“but it isn’t up there.”

How high is this place? I asked. A daft question because I already knew.

“Four thousand, one hundred and sixty seven metres.” Khalid didn’t answer. That was the response from several other people in our group. It was said very slowly, as if to emphasise every inch. And it wasn’t said with a great deal of warmth.

Crampons are not very comfortable. I wondered if mine had been put on upside down but I wisely kept that thought to myself.

About half an hour later, we were ready and started to follow Khalid as he set a meandering path through the dry river beds of the Azzadean Valley. As we began to ascend, our path turned sharply upwards past the stunning waterfalls of Ighouliden.

In whichever direction we looked, the scenery was stunning. The problem, though, was that the mountain paths were very narrow. And we were mostly walking over fairly large rocks or loose gravel. Both of which required very close attention. We very soon learned that you either walked, keeping a fairly close eye on the terrain, or stopped to admire the scenery. But not both at the same time.

After about three hours, we climbed to over 2000m and several of our group began to feel the effects of altitude sickness. Dizziness and nausea being the most common. Fortunately, a brief rest and plenty of water were enough to alleviate them.

The problem with stopping though was that, although we all looked forward to a rest, starting to climb again seemed that much harder afterwards. It was still hot. And the landscape, although still stunning, was by now becoming repetitive with no signs of reprieve. There was, by now, very little conversation amongst us.

Yet, even here, hours away from civilisation, there was no shortage of encampments in which the local Berbers had made their homes. Everyday, we were told, they would think nothing of trekking up and down the mountain for supplies. and in all weathers.

After a total of seven and a half hours, we reached ‘The Refugio’. Bearing an uncanny resemblance to Tolkien’s Helms Deep, this hostel was to be our resting place for the night. Although spartan in its facilities, it was a very welcome sight. It was very cold now and patches of snow were covering the ground.

We would need crampons.

Khalid had decided on an early start the following morning. The plan was to complete the ascent and then walk all the way back to Imlil in one day.

Setting off at 6am, the sun had not yet risen. It was still dark so torches were a must. Except for me, because I’d forgotten mine. Armed with our walking poles, we negotiated a mixture of terrains – snow, ice, rocks and loose gravel.

By the time the sun had risen above the Atlas mountains, the peak of Toubkal was now in full view. I remember feeling conflicting emotions ranging between relief at being able to see our final destination and despair at just how much further and higher we still had to go.

It took us about eight hours to reach the summit. But reach it we did. Although tired, the pain of our ascent melted away very quickly. 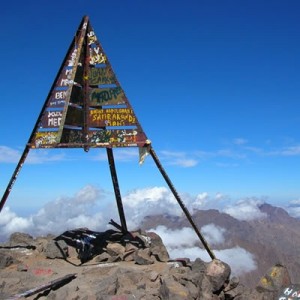 Yet the view was enough to make it worthwhile. To be able to look all around us and look down upon the high Atlas mountains to one side and the Sahara on the other.

“The views were immensely wide. Everything that you saw made for greatness and freedom, and unequalled nobility.”
Karen Blixen, Out of Africa

The journey down presented its own problems. We all slipped. We all fell. But we all made it.

I’ve never climbed a mountain before. Had I known just how hard it would be, on every organ and every muscle of my body, I don’t think I would have volunteered.

But, after having walked for a total of 21.5 hours in 2 days, we had achieved our goal. I won’t say conquered Mount Toubkal. It was more of an honourable draw.

But, now that the pain has gone, I’m glad I did it.
for more information about our charity and what we do, please visit: